My taste in classical music is obviously expanding because a year ago, I would never have bothered (or even wanted) to listen to music written within the last 50-100 years – except for Gershwin, of course. Now, I’m trying out music written by people my age or even younger. (I’m, er, 29, in case you were wondering. Yeah. Moving on.)

There actually is an awful lot of good music out there and the composers are still living and they’re still writing more music. Is some of it weird? Oh yeah – for sure. Check out Richard Reed Parry’s Music for the Heart and Breath – weird, but oddly relaxing at the same time. Ian Wilson has some strange stuff and Lera Auerbach – definitely …well… we’ll just call it dissonant.

The other night I decided to download a violin concerto by Pulitzer prize-winning composer Jennifer Higdon. 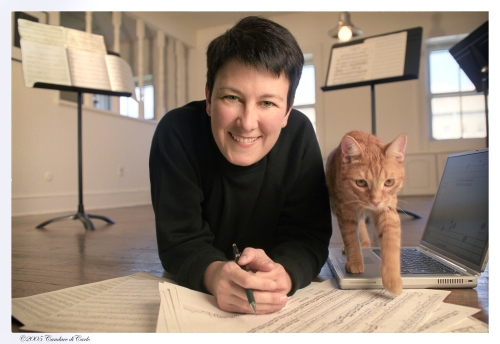 I had no idea what to expect when I first hit play, but man is it ever cool! It’s so high-energy and fast-moving. Originally written for violinist Hillary Hahn and premiered with the Indianapolis Symphony a few years ago, it’s a ridiculously fun piece. Though I should admit – I have no idea how the soloist still maintains use of her arms afterwards. Do violinists have to ice them down after such a performance? I’m guessing yes.

Contemporary orchestral music isn’t nearly as bad as I thought!

Higdon won her Pulitzer Prize for this very concerto – which I’m going to hear in March (assuming my vacation request is approved!) played by Chattanooga Symphony Orchestra Concertmaster Holly Mulcahy. There are still tickets left – couldn’t believe some sections were already sold out, but happy to already have my ticket! Can’t wait!

I’m kind of glad to be branching out from the Mendelssohn!

because wool fixes everything

Getting my knit on

A blog about running....and finding time to run on the road

losing insecurities and weight without losing my mind...

A love letter to our planet

a celebration of being a slow runner

My journey to a healthier me

It's A Marathon AND A Sprint

And a 10K and a 200 Mile Bike Ride and an Obstacle Race and Anything Else We Find!

Roaming and eating our way through Columbus and beyond.

Living life one pair of running shoes at a time.

I'm Heather, a.k.a. Bruyère, and I'm training to run a marathon. No really. I am! This is my journey.

My WordPress blog is a music talk area

Made possible by the Wisconsin Union Theater’s Concert Series.

Come see the world through my rose colored lens

17 and Baking
Save Our Symphony Minnesota

Save Our Symphony; End The Lockout

Pavarotti! Nothing more, nothing less, and nothing will be off-limit! And then some!

Odette
where are we now?

classical and contemporary music in the new millenium